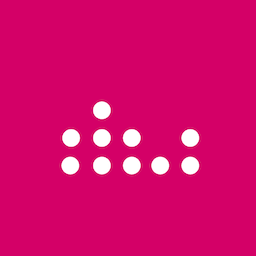 Limit acoustic guitar, vocals and synth bass with zero attack to give them a strong presence in the mix. The fade dial gives you adjustable control over anticipated peaks with a brickwall punch.

• Complex engineering available in just three dials and three buttons, allowing you to focus on your creativity and workflow. • The unique ‘fade’ dial gives you complete control over the lookahead curve, allowing you to limit tracks heavily without distortion. • A perfect Brickwall Limiter for using on individual tracks and busses. We designed the Brickwall Limiter with fifteen years of music production in mind. We asked ourselves, what dials and features did we want when mixing a track? The answer came to us easily: something with the same complexity and richness as some of the most well-known limiters out there, but with the simplicity and ease-of-use that a production workflow demands.

“You are mixing delicate material like vocals or acoustic guitars, but you can’t seem to control your track’s sibilance and transient details.” When compressing or limiting delicate material like vocals and acoustic guitars, artefacts like distortion and breathing-and-pumping can be very obvious. The Denise Brickwall Limiter minimises these artefacts by fading in the required gain reduction, ensuring smooth results while still catching all the peaks, as well as using your track’s crest-factor to adapt its release time to, producing very natural sounding results. “You are limiting a track, buss-group of a full mix, but the low end distorts before achieving the intended control or loudness.” Because the low end is usually the loudest section of the frequency spectrum, its also the first section that hits a plugin’s threshold and starts distorting when using a brick wall limiter with zero attack. This is especially true when using short release times as well for the purpose of optimising loudness. Because of its ‘fade’ feature, the Denise Brickwall Limiter lets you limit low heavy tracks at zero attack with minimal distortion. In addition, its crest-factor based adaptive release makes sure the release time is set to the shortest duration possible, without introducing degradation. “You are trying to control the dynamics of a track with a lot of sustain, like a synth pad or strings, but your track keeps distorting.” Tracks with a lot of sustain can easily distort when using the short attack times needed to control them. The Denise Brickwall Limiter features a ‘fade’ function that lets you anticipate the peaks in your track while keeping an attack to zero to catch all peaks. Subtly fading in the limiters gain reduction in advance this way, will soften the limiting effect and minimise distortion artefacts.

The Denise Brickwall Limiter is a delicate ‘get-results-fast’ limiter for anticipating and controlling the peaks and dynamics in your mix, using your track’s crest-factor to adapt its release time to. Set to its default settings, you simply drag down the threshold to limit the peaks in your track in a very natural way, utilising the limiter’s ‘fade’ and ‘speed’ features that intelligently smooth out the required gain reduction, both backwards and forwards in time. With the ‘boost’ switch activated, you can quickly maximise the overall volume using the output gain slider as the limiter’s ‘ceiling’ value, just as you would during mastering. With its additional ‘style’ menu that applies an adaptive filter curve, and a ‘link’ button to preserve the stereo image, the Denise Brickwall Limiter gets you fast results controlling the peaks and dynamics in your mix in a very natural way.* (*Note that although the Denise Brickwall Limiter has a slightly higher CPU-load due to its lookahead scheme, this part of the algorithm will be bypassed when the ‘fade’ control is set to 0%, making the plugin consume only about 33% of it’s full CPU-load) THRESHOLD (-48dB to 0dB): Controls the threshold of the limiter, defining the volume level where the limiting effect kicks in. INPUT (-48dB to 48dB): Input gain that lets you boost or attenuate the signal going in, giving you more control over the signal. OUTPUT (-48dB to 48dB): Output gain to manually compensate for the volume decrease caused by the limiting effect, or to set the limiter’s ‘ceiling’ level when the ‘boost’ switch is activated. FADE (0% to 100%): Controls the length of the curve used to fade in the limiter’s gain reduction using the plugin’s internal ‘lookahead’. Set to zero, the curve will be 0.0ms. SPEED (0% to 100%): Controls the range of the limiter’s internal auto-release. Set to zero, the release will always be 0.0ms. STYLE (dark / natural / bright): A menu that lets you choose different styles, allowing you to specify the timbre of the limiting effect. LINK (on/off): A switch that lets you to link the left and right channel limiting, allowing you to preserve the stereo image of your track. BOOST (on/off): A switch that enables the limiter’s auto-makeup gain, which will automatically compensate for the limiter’s volume decrease and boost the volume up to the ceiling value set by the output volume slider. 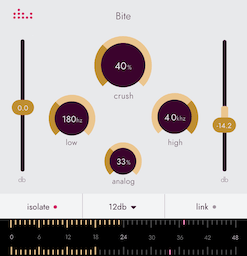 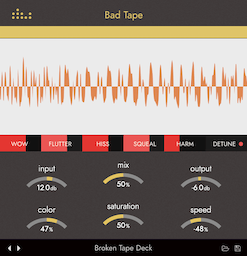 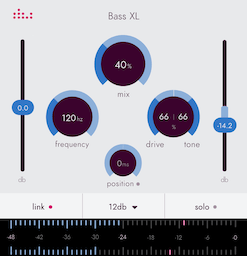 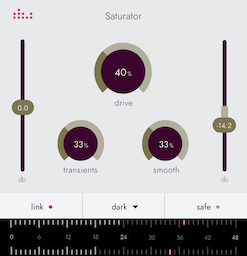